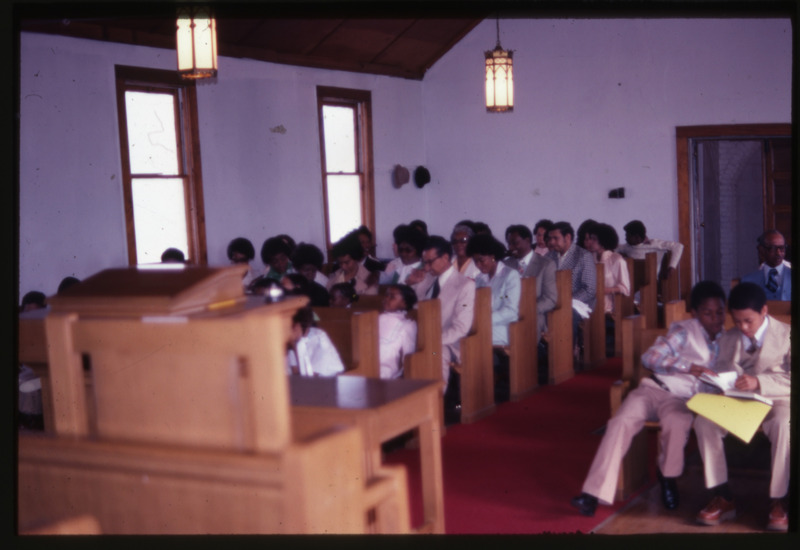 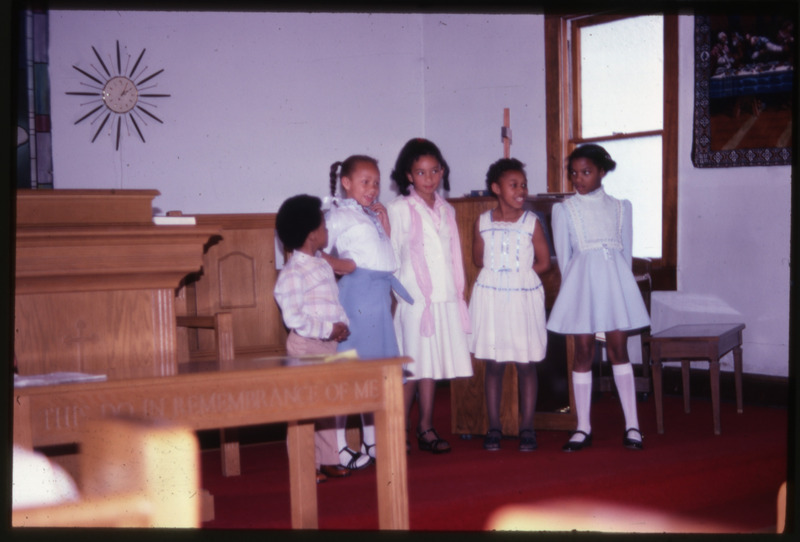 A group of children stand at the front of the Boone Mennonite Brethren Church, circa 1979. Identified are: Jervay Grimes, Tonia B. Coles, Sharron Grimes, Gwen G. Jacobs, and Lena H. Cooper.

The Mennonite Church is an Anabaptist denomination with roots in Europe, and the Boone church is drawn specifically from Krimmer Mennonites with Russian roots. They are referred to as “peace churches” due to their commitment to pacifism.

Reverend Joseph Tschetter and his wife Katharina, two ordained Mennonite missionaries from the Midwest, were the starting point of the Mennonite congregation in Boone, NC.

Upon their arrival to North Carolina in 1903, the Tschetter's started working to serve the African American community in Elk Park (Avery County) at the Salem Mennonite Mission Church and Orphanage. In 1911, Reverend Tschetter had expanded into Watauga County and was holding services in what is now known as Junaluska. By 1917, Tschetter had organized a Mennonite congregation and in 1918 he built the Boone Mennonite Brethren Church. The same church still stands today, situated in the heart of Junaluska on Church Street, and is the largest Mennonite congregation in North Carolina. [1] 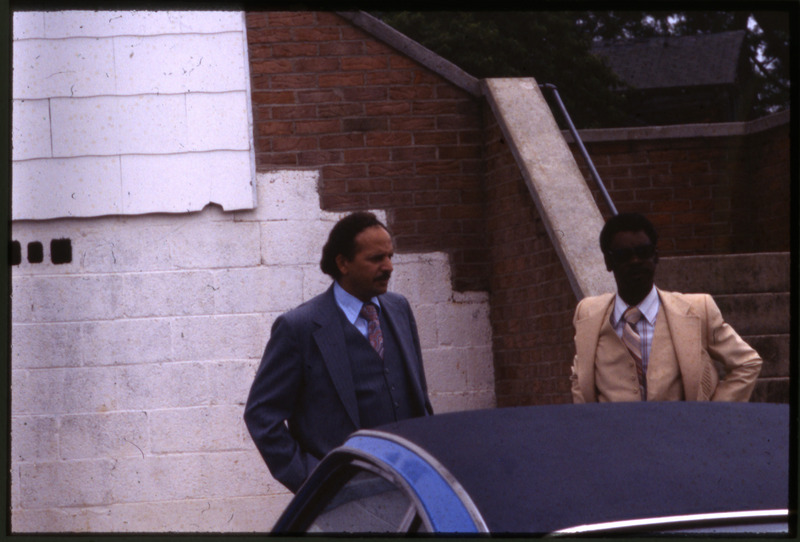 James Fox and Reverend Otis Whittington standing at the steps of Boone Mennonite Brethren Church, presumably prior to or after service, circa 1979. 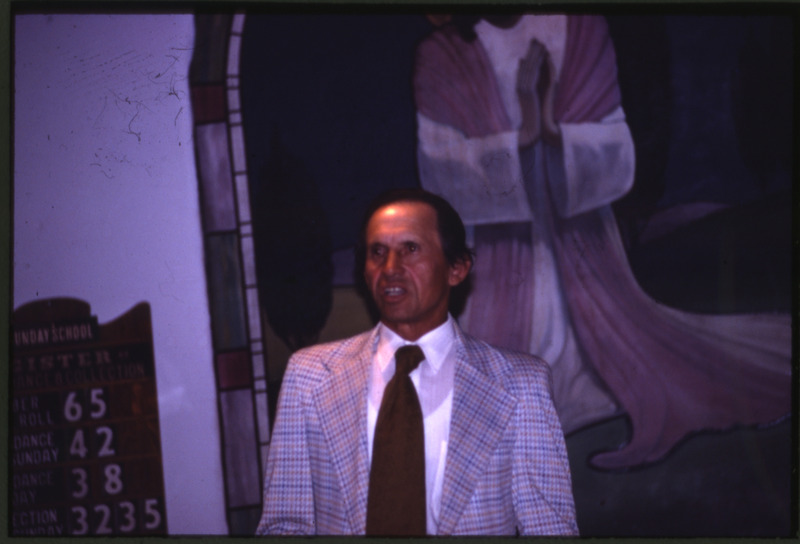 Grover Bailey standing at the front of the Boone Mennonite Brethren Church, circa 1979.

It was once one of several Christian denominations that served in the community. The other three prominent ones were the Methodist Episcopal Church, Little Rock Zion Church (Baptist), and the Pentecostal Holiness tent services. Between the four churches, there was a lot of overlap when it came to patronage. Members of the Methodist church, Baptist church, and Pentecostal services would also frequent the Mennonite church, and vice versa.

One example of this overlap is Roberta Hagler Jackson, wife of Cecil Jackson, who was born into a Pentecostal family. She was the niece of Rossalee Hagler, the Pentecostal tent revival preacher, and recalls going to Pentecostal churches and tent revivals during her childhood. In Junaluska: Oral Histories of a Black Appalachian Community, she recalls, “I remember staying up all night long at those meetings. I’d lie down and go to sleep, and then I’d wake up and they’d still be going.” The Pentecostal Holiness tent services in Boone were held at North Street Park. [2]

Jackson also had connections to the Methodist church. Her grandfather, Robert Hagler, Sr., was a deacon at the one-room church. Roberta states that her family attended services at the Methodist church every Sunday, in addition to their Pentecostal services. When she later started dating Cecil Jackson, she also began attending service at the Boone Mennonite Church. 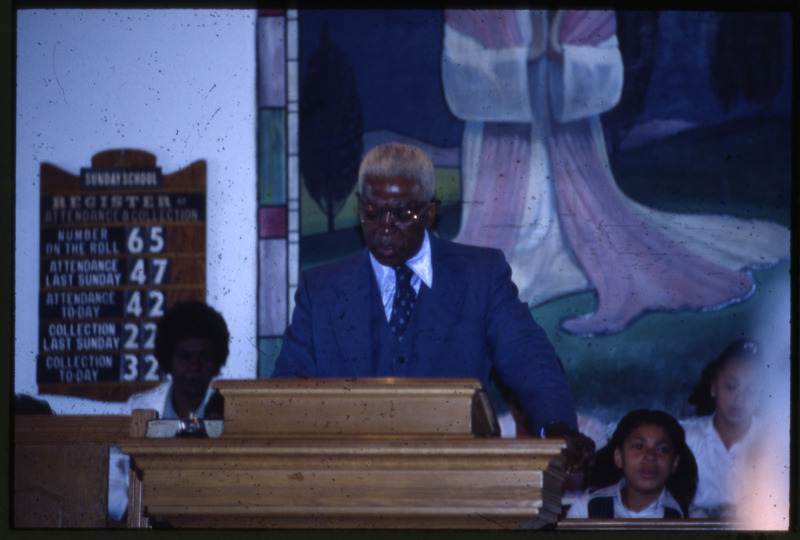 This appears to be Reverend Leroy Kirkpatrick (1910-1993) at Boone Mennonite Brethren Church, where he was assistant pastor, circa 1979.

Gene Ray details similar experiences with crossover church attendance in Junaluska: Oral Histories of a Black Appalachian Community (2020). When he first moved to Junaluska, he attended the Methodist church with his mother. His parents were also members of the Little Rock Zion Church. Ray himself was baptized by Reverend Horton for the Boone Mennonite Brethren Church. [3]

According to Ray, even the church leaders participated in the crossover. He states, “Sometimes the Reverend Horton and the Reverend Hatton would preach at both churches. [...] they might have a revival at the Mennonite Church one month, and the next month the Methodists would have evening services, and the Reverend Horton and his wife and others would go up and worship with them.” [4] It would seem that the community preferred to focus on worship and community than denominational divisions.

Over the years, the churches in Junaluska dwindled. The Pentecostal Holiness services stopped in the 1950s. The Little Rock Zion Church closed its doors in 1974. The Methodist Epsicopal Church closed in 1984 and was later demolished in the late 1990s. This left the Boone Mennonite Brethren Church as the religious epicenter of the community. [5] 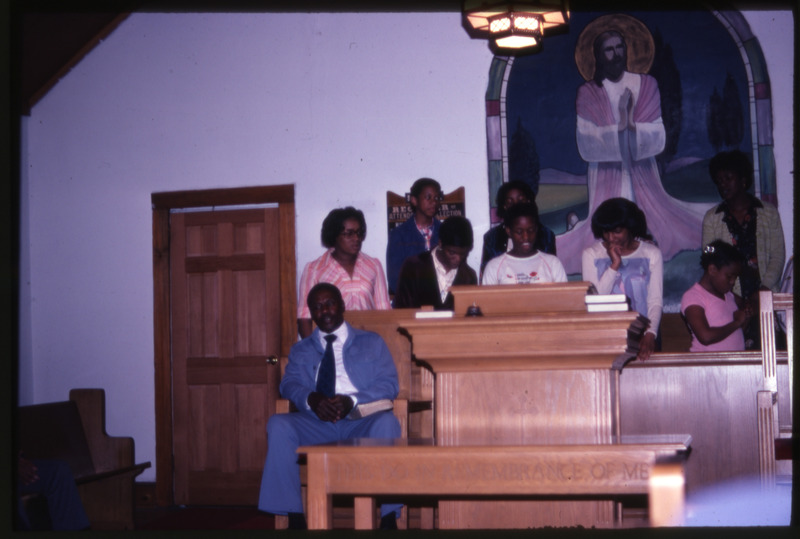 ← A Strong Sense of Community
Junaluska's Impact on the Mennonite Church →
Boone Mennonite Brethren Church: Heart of the Junaluska Community