John R. Waite became interested in the East Tennessee & Western North Carolina Railroad in the early 1980s. In 1988, he established The Blue Ridge Stemwinder, a small magazine devoted to documenting the history of Southern Appalachian narrow guage railroads. A year later he organized a meeting of fellow railfans interested in the narrow gauge railroad at Boone, North Carolina. The meeting, along with the Stemwinder, were the impetus needed in the formation of the ET&WNC Railroad Historical Society.

John, along with Chris Ford, his graphics partner, produced the Stemwinder for members of the Historical Society from 1988-2007. It contained excellent stories, never-before-seen photos, detailed railroad maps, scale drawings of railroad equipment and structures, reproductions of historical railroad documents, and news about anything associated with the ET&WNC Railroad, the Historical Society and its members. In 2003, John and Chris published the highly acclaimed book The Blue Ridge Stemwinder - An Illustrated History Of The East Tennessee & Western North Carolina Railroad And The Linville River Railway. This was John's masterwork and was the most thorough and comprehensive history of the ET&WNC Railroad ever written - the culmination of over ten years of research and writing, with almost 400 pages and over 300 photos.

John held a B.A. in History from William Jewell College in Missouri and was a former American History and Yearbook teacher, and High School Girls’ Basketball Coach. He spent the last eight years of his career as a school district Technology Coordinator. He retired from public education in 2001. John and his wife Sharon, a longtime school administrator and current Executive Director of the Show-Me Curriculum Administrators Association, lived in Jefferson City, Missouri, where John finally had the opportunity to model his beloved little railroad. John passed away after a short illness in 2012.

This collection contains PDF copies of three issues of the Stemwinder, which focus on the Shulls Mills and Boone depots of the ET&WNC, both of which were located in Watauga County. 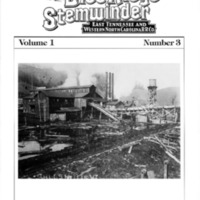 The Winter 1989 edition of The Blue Ridge Stemwinder was published by John R. Waite and features articles about Shulls Mill, the Boone Fork Lumber Company, and sawmill operation in general. Pictures are included in the articles. This item was scanned… 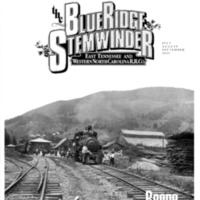 This July, August, and September 2000 edition of The Blue Ridge Stemwinder was published by John R. Waite and features an article about Boone and one about excursion trains along the East Tennessee & Western North Carolina Railroad. Pictures are… 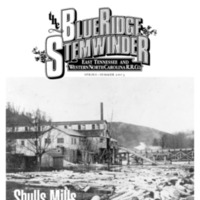 The Spring/Summer 2001 edition of The Blue Ridge Stemwinder was published by John R. Waite and features articles about Shulls Mill, the Boone Fork Lumber Company, and sawmills. Pictures are included in the articles. This item was scanned by the…
View all 3 items