This collection consists of several letters, photographs, and other ephemera found inside the walls of a house at 164 Carolina Avenue in Boone by Adrian and Heidi Tait during renovations to the house in 2006. Most of the items were found between floors and ceilings during the gut rehabilitation completed by the Taits, while a few were found in a crawlspace in the attic under the eaves of the second floor.

Roby Allen Adams (1865-1941) and Carrie Frances Smith Adams (1882-1950) built the house in late 1924 as one of the new homes in the much-advertised Buena Vista addition to Boone (for a blurb on the completion of this home, see Watauga Democrat, 9/18/1924, p. 3). Prior to the Taits' purchase of the property, previous occupants of the house routinely reported having encounters with "Mrs. Adams"--presumably Carrie Smith Adams--in the house, often along the upstairs banister. Indeed, the Taits were greeted early on with an inquiry from neighbors that they found puzzling: "Do you ever see Mrs. Adams?"

Adams family members and descendants owned the house after Carrie Adams's death until 1995, the most prominent being her daughter, Daisy Adams Rush (1913-1994). In 1997, Elizabeth Percival Howell purchased the house, often renting to performers at Horn in the West. Howell sold the property to the Taits in 2006.

The collection includes several photographs, including one tintype, as well as letters between Charles H. Adams and "Louise" (who may have lived at 111 Carolina Avenue); Mrs. E. G. Hodges of Fresno, OH, and C. H. Adams of Ft. McClellan, AL; Rose Marie Mozelack of Kingston, PA, and William H. Alexander of Shulls Mills, NC; and Cale Greer and Mrs. Jennie Ray Greer. 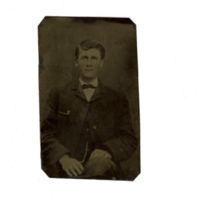 Black and white tintype image of a man in a jacket, possibly a railroad conductor, posing for the camera. Image was found in a letter to Charles Adams, also in this collection.

Photo of Man with Guitar 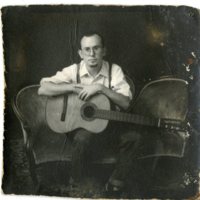 Black and white image of a man sitting on a couch holding a guitar, found in a letter to Charles Adams. 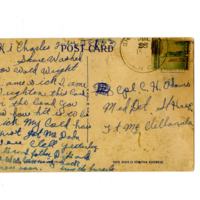 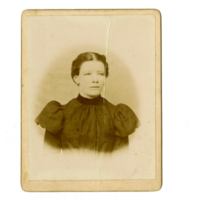 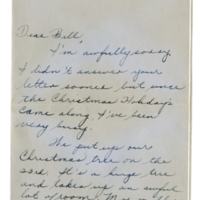 Handwritten letter from Rose Marie Mozelack (Kingston, PA) to William Alexander (Shulls Mill, NC), December 30, 1947, including envelope with postmark. The letter describes preparations for Christmas, learning to drive, and a mystery novel she is… 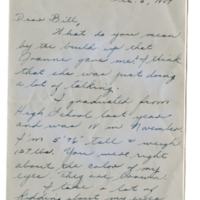 Handwritten letter from Rose Marie Mozelack (Kingston, PA) to William Alexander (Shulls Mill, NC), December 5, 1947, including envelope with postmark. The letter includes a detailed physical and ethnic description of Mozelack, her employment, her… 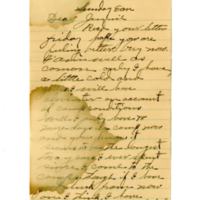 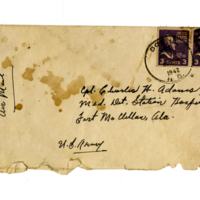 Handwritten letter from Louise (Boone, NC) to Charles H. Adams (Fort McClellan, AL), with envelope, postmarked July 24, 1942. The letter requests that Adams send $35 to cover a bank note due for "Allen." Allen was the oldest brother of Charles Adams.… 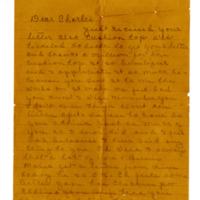