The Alfred and Daisy Adams Collection consists at present of a single photograph showing a set of Boone businessmen, including Alfred Adams, posing on a hill to the south of Downtown Boone circa 1960.

Alfred Adams was the son of Tarlton Pulaski Adams and Mollie Tugman Adams. He enjoyed a long career as a Boone businessman and bank executive, and he was especially critical in drawing new businesses, such as Shadowline, IRC-TRW, Vermont American, and Melville Shoe, to the Boone vicinity during the 1950s and 1960s. He began his career with Northwestern Bank in the 1940s, and in the years to follow, he helped establish the Watauga Medical Center, Boone Golf Club, and the Horn in the West outdoor drama, boosting tourism to the region in the process. In addition to a number of connections with Appalachian State University, he was also a deacon and Sunday school teacher at First Baptist Church of Boone.

Daisy Adams received her B. A. and M. A. degrees from Appalachian State University and taught for 32 years in Watauga County. Like her husband, she had numerous connections to Appalachian State University, and the Daisy Adams Scholarship in the Reich College of Education is named for her. She was also very active in the First Baptist Church of Boone, serving as one of the church's first female deacons. At the time of her death, Alfred and Daisy Adams had three sons, eight grandchildren, and six great-grandchildren.

Sam Adams has shared these items with Digital Watauga through a digital use rights deed of gift. Any reprinting, redistribution, or other use of these images outside of Digital Watauga requires written permission from Sam Adams. Contact Digital Watauga for additional details.

Presentation of Car to Winner with Alfred Adams, 1953 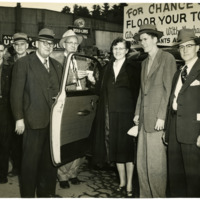 This image shows a brand new car being awarded to Mrs. Lou Hopkins by the Boone Merchants Assocation on January 16, 1953. An article featuring a cropped version of this image ran in the January 22, 1953, issue of the Watauga Democrat. The caption for… 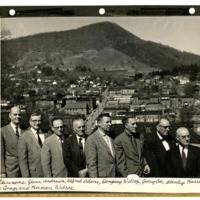