Reel #26 of 26 home movies in the original Clarence A. Price Home Movie Collection, this reel begins with snow footage shot near the Daniel Boone Hotel, apparently at a later date than the preceding 1955-56 snow coverage, as the Super Dixie-Home Market of the 1955 reel has become the Winn-Dixie on this reel, while the present-day building on the southwest corner of Appalachian Street and West King Street--not present on the 1955 reel--has been constructed. The last 25 seconds of the reel show footage of the 1958 ASTC Homecoming Parade passing in front of the Appalachian Theatre, whose feature that day was "The Flame Barrier" (1958) featuring Arthur Franz.

This reel can be viewed online at https://www.youtube.com/watch?v=OC3i8S7IQ2w 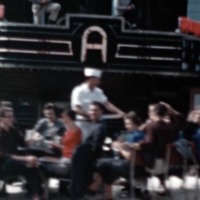